You might wonder why adopting a largely plant-based diet is now seen as essential if we are to achieve the global environmental goals set for 2050. The simple answer is that plant-based foods have less impact on natural resources and produce less pollution and greenhouse gas emissions than animal-based foods. Plant-based foods also can provide enough food to sustain all of the world’s population, even at 2050 levels, if we adjust land use and the global food system to let that happen.

This is where you come in. Your choices really do matter.

The following charts are helpful to illustrate fundamental issues that need consideration. The first is a graphic depiction of the world’s surface – water, ice and land – and how habitable land currently is used.

Land is called ‘habitable’ when it does not include glaciers and barren land. You can see that 71% of the world’s land is habitable and 29% is glacier or barren land.

Half of all habitable land is used for agriculture.

This percentage is considered by many scientists to be excessive and a trigger to climate change and massive loss of species diversity. Much of this land has been converted to agricultural use from, for instance, forest and other wilderness. In environmental and social terms, conversion to agriculture is extremely costly. It is also called ‘land-use change’ and you will see it depicted in orange-yellow in the second chart.

How is all that agricultural land used?

Protein and Calories are used as the primary measures of sufficiency when looking at human food requirements. Protein deals with growth and repair; calories deal with energy. Notice the source of these requirements, as given in the chart:

Livestock provide 37% of global human requirements for protein, from meat and dairy.

You can see that livestock production uses the greater portion of agricultural land but contributes the least amount of food value as protein and calories. This imbalance might begin to explain many of the inequalities that currently exist within the global food system.

Livestock production also uses the most water and contributes the greatest amount of greenhouse gases. It accounts for the majority of land-use change, or conversion to agriculture. Here’s another chart to show how that looks: 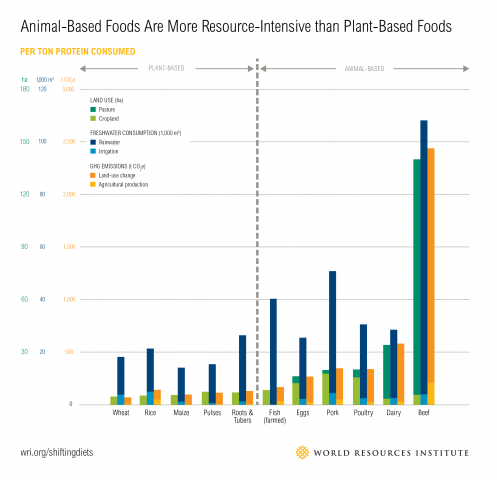 From these two graphic depictions alone, it should be clear that a global reduction in the proportion of land and water given over to livestock production makes sense if we hope to feed all of the world’s population and mitigate climate change.

A global shift to a largely plant-based way of eating is likely to reduce the total amount of land required for agriculture, enabling a significant return to stewardship schemes and wilderness. Food crops grown for direct human consumption are a more efficient use of crops and can improve food security and reduce inequalities. Reform of the global food system to support these changes is possible and starts with your personal choices.