The Contented Vegan is a guide to the fastest-growing lifestyle of the 21st century.

Its author, Peggy Brusseau, was born in the mid-west state of Minnesota. As one of nine children, she was raised to be self-sufficient and skilled in as many ways as possible: in a household of that size, everyone had to help out and make themselves useful.

She claims there was no hardship in that experience; rather, it has made her adaptable. She has applied herself to many jobs and roles over the years, all of them eventually inspiring creative expression of some sort. Peggy writes and cooks every day.

While running a small-holding she quickly realized that she could no longer participate in animal husbandry and adopted a vegetarian diet. Very soon she moved on to a plant-based way of eating. 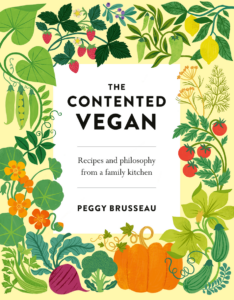 ‘I have been through every pre-vegan style of eating and thinking,’ Peggy says, ‘and have faced most of the hurdles to achieving a healthy, plant-based diet. I know my onions.’ She has been vegan for more than thirty years, and is author or co-author of more than 24 published books. She recalls:

‘Veganism was a forbidden word in many of my earlier books. The food was plant-based, but the publishers insisted the word was not used for fear no one would try the food! Now that it is fashionable, I would like to help people prepare vegan food that is wholesome and to learn that ‘white bread and jam’ veganism is not the way forward.’

Peggy thinks of her book as a lifestyle companion. She is adamant that veganism is not just a fashion statement, but a true lifestyle choice that can greatly improve health, benefit the environment and satisfy one’s personal philosophy.

‘The Contented Vegan is a peek into my life in many ways. People are always asking me for tips, suggestions and guidance about how their food choices can solve problems. My book includes recipes but these are in the context of offering a broader understanding of a plant-based diet: its relevance to nutrition and health, to life stages, ethics and the environment. When these elements are brought together, the result really is a contented vegan. One who feels both empowered by and at ease with their choices.’ 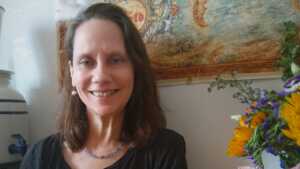 The book, like Peggy herself, is a friendly, practical guide that provides authoritative answers to all the most urgent questions that new and would-be vegans ask. It is not just about the recipes – which are simple, inexpensive and healthy – but about choices, ethics and the practical tips and solutions that will help the reader succeed in their new lifestyle.